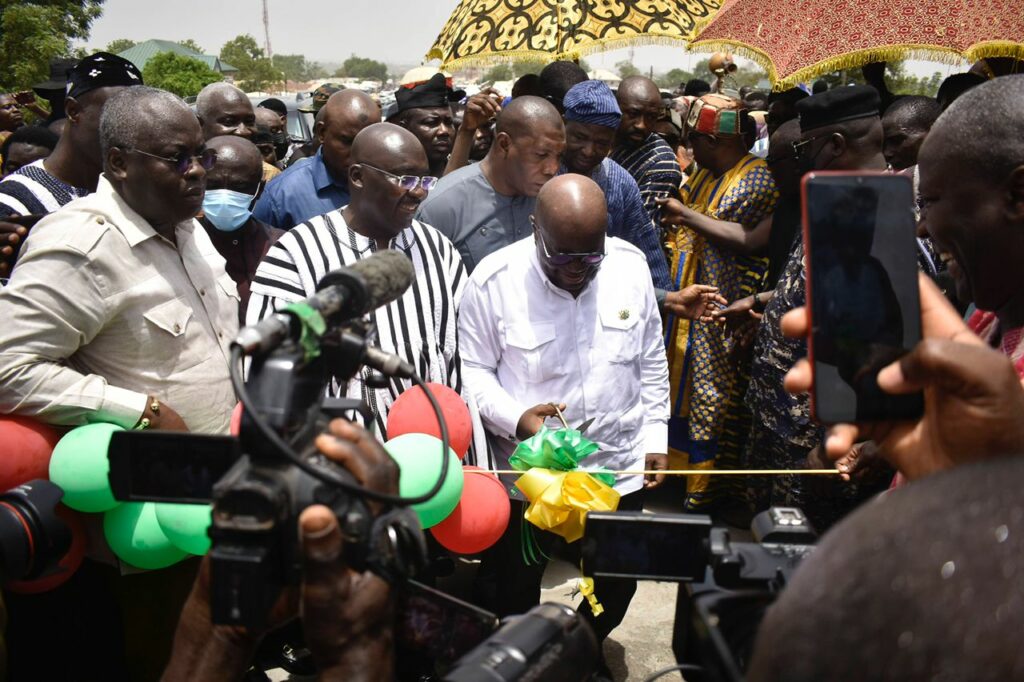 President Nana Addo Dankwa Akufo-Addo has opened the Tamale interchange, the first of its kind to be constructed in the northern part of the country, to traffic to improve travel times in the area.

It is a pre-stressed concrete continuous bridge with very few joints to enhance driving comfort, and it involves the construction of some 1.1 kilometres of roads on the bridge, the provision of drainage system, the erection of streetlights and the construction of 10km of asphalted overlay around the Interchange.

Its construction began on April 10, 2019, as part of the first phase of the two-billion-dollar Master Project Support Agreement between the government of Ghana and the Sinohydro Corporation of China to construct a number of infrastructure projects including roads, bridges, housing facilities and extension of electricity to rural communities across the country.

President Nana Addo, in an address to open the Overhead, said the facility, which was constructed three months ahead of schedule, was on budget and lauded the good relations between Ghana and China, which had yielded the project.

President Akufo-Addo said most of the projects under phase one of the Sinohydro deal were at various stages of completion.

He said that apart from the interchanges, the government had also undertaken critical roads to improve urban mobility across the country to reduce travel times on the highways.

President Nans Addo said as part of the critical roads project, some roads in the northern sector of the country including Tamale, Yendi, Walewale, Gambaga, Nalerigu and Damongo were being asphalted, adding, work would commence on other priority roads in the northern part of the country including the Vendi-Zabzugu Road by the second quarter of this year

He urged the Ministry of Roads and Highways to ensure proper maintenance of the Tamale Overhead over the designed period.

He appealed to motorists using the overhead to adhere to the various road safety measures to ensure safe use of the facility.

The Minister for Roads and Highways, Hon. Kwasi Amoako-Attah, whose speech was read on his behalf by the Minister for Tourism, Arts and Culture, Dr Mohammed Ibrahim Awal, said the Tamale Interchange was constructed to the standards and specifications of the Ministry.

Mr Lu Kun. Chinese Ambassador to Ghana said the execution of the project was another milestone of China – Ghana relations, which had yielded positive results over the years.

Mr Kun was hopeful that the project would bring convenience and happiness to the people of the area.

Alhaji Shani Alhassan Saibu, Northern Regional Minister said the project had completely transformed the landscape of Tamale adding, “Clearly, movement of traffic will ease, and business will flourish to the benefit of the local economy”

Alhaji Saibu said, “We would monitor the use of the facility and carry out the required decongestion in terms of unauthorised buying and selling and unauthorised parking stations along this edifice I call for the cooperation and support of our Chiefs and the people of Tamale for us to be able to handle this facility with the desired attention for the benefit of all.

Ya-Na Abukari (II), Overlord of Dagbon, whose speech was read on his behalf, said the project, “gives real meaning to the government’s declaration of 2021 and 2022 as the year of roads.”

He said the project would ease congestion in the central business district of Tamale and improve traffic flow in the metropolis, which would increase economic growth and enhance the living conditions of the people.

He appealed to the government to speed up the ongoing road projects such as the dualisation of the Yendi through the Eastern Corridor Road, Tamale and Yendi Roads project.